EV Chargers
by Mila Dunbar-Irwin, Moab City Sustainability Director.
We’re going to have to come up with a new noise for our kids to say when they’re pretending to drive a car, because “vroom, vroom!” will be a thing of the past sooner than you might expect. 4.6% of new car sales worldwide were electric (including plug-in hybrids) in 2020, with Norway leading the way at 74.8%, and the US down at around 2.0% (Pew Research Center). However, that number is expected to rise fast, particularly in light of the commitments automakers are making. The days of the internal combustion engine appear to be numbered. 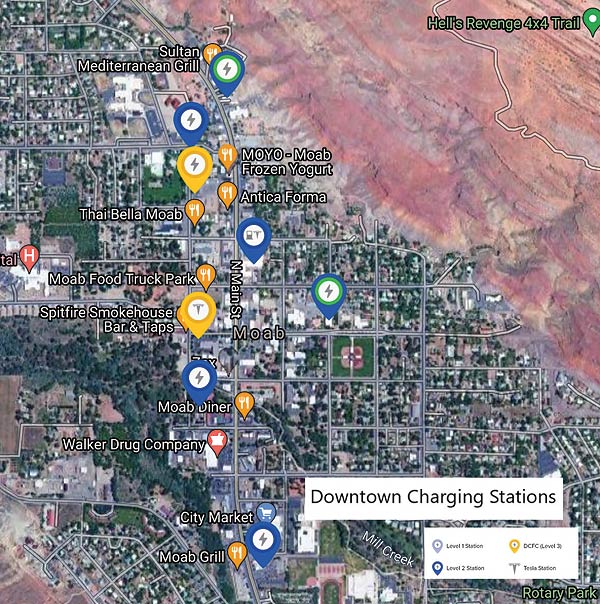 There are many advantages to driving an electric vehicle beyond simply cutting emissions. They’re quiet, require less maintenance, and there are tax credits and financial incentives in many places to switch to electric. You can also charge your car at home while you’re not using it, which obviates the need to ever stop for fuel unless you’re on a road trip.

In light of this transportation transformation, the City of Moab and local businesses have already taken steps to invest in charging infrastructure. There are 22 individual outlets within a few miles of downtown, many of which are free to use. The City of Moab maintains two SemaConnect chargers at City Hall and two at the Moab Golf Course, and there are two more each at Moab Springs Ranch, the ACT Campground, and the Adventure Inn. There are four Tesla Superchargers at the Best Western, and two Tesla chargers at the Homewood Suites (for customer use only). Rocky Mountain Power maintains one DC fast charger and two regular chargers at their location near Swanny Park. The Gonzo Inn also has a charger for guest use, and Crump Reese Ford maintains a charger available during business hours.

These numbers put Moab at a ratio of 1 public charger per 568 vehicles (registered in Grand County), which is well ahead of the national average of 1 charger per 2,750 vehicles, and better even than California’s ratio of 1 public outlet per 957 vehicles! As electric vehicle technology continues to improve and become more affordable and practical, Moab is well positioned to be a convenient place to drive an electric vehicle, for locals and visitors alike. 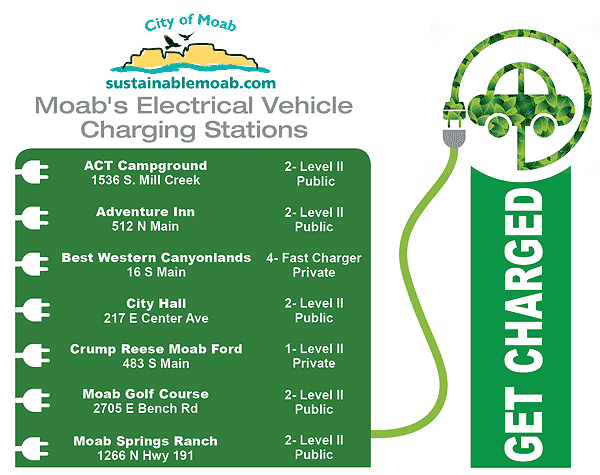