Evolution’s bizarre twists and turns
by Martin Lockley, Moab Giants
Last month we looked at the elaborate head gear of the “horn-faced” ceratopsians like Triceratops and Utah’s Diabloceratops and admitted we did not exactly know why they went in for such extravagant, frilly designs or whether they were used for protection, sexual display or as radiators to cool the blood. What we do know is that these extraordinary developments appeared late in dinosaur evolution. But if so useful, why did they not evolve earlier. Darwinian thinking suggests all designs were useful for survival. But maybe not! T. rex had a big head and powerful teeth useful for predation and scavenging, but why such puny arms which some paleontologists regard as useless. Some studies suggest extra growth in the head is ‘compensated’ for by reduced growth in the arms. This idea is supported by dinosaurs with opposite growth patterns: small heads and long arms. Deinocheirus, meaning terrible claw, is a famous long-armed contemporary, and ostrich dinosaur relative of T. rex, with a small narrow head and no teeth. It may have been the preyed of Tyrannosaurs. How can two related dinosaurs be so different, and growth or development programs go in two opposite directions? 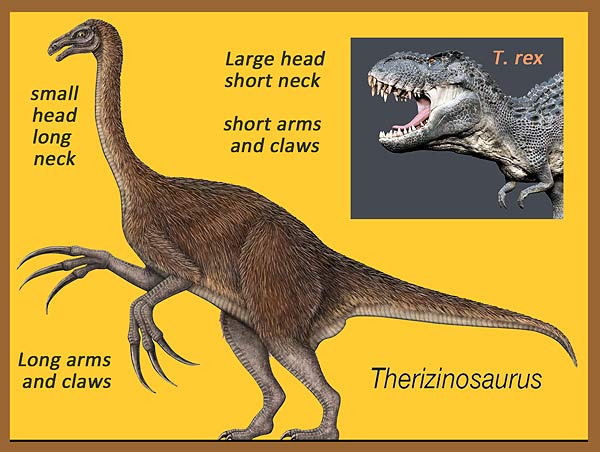 
Such patterns occur in primates: humans have big heads and small arms compared with chimps, which have smaller heads and longer arms. (Human males have broad shoulders and narrow hips compared with females’ narrow shoulders and broad hips). This is the principle of compensation or trade offs. You can’t grow one organ too big without reducing the growth elsewhere. Take the elephant rhino and bison, all have giant heads, horns or tusks, yet all have tiny tails. 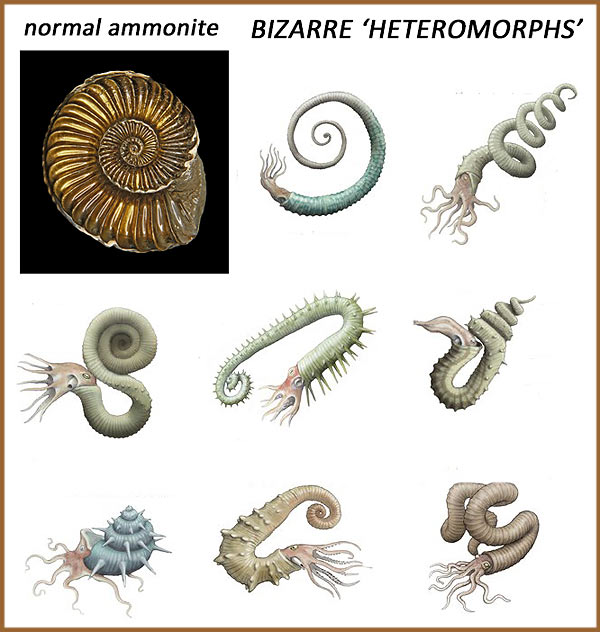 Nature at its most bizarre is seen in ammonites, ancient squid relatives, now extinct. The simple flat coil ‘uncoiled’ dramatically in a minority of species known as heteromorphs (meaning ‘differently shaped’). They tried out many different designs and then went extinct. Paleontologists are challenged to say why!


But back to the most bizarre of theropod dinosaurs: the therizinosaurs meaning “reaping saurian” because of their long, flattened sickle-like claws, some exceeding 50 cm (20 inches). Most theropods were carnivores, but therizinosaurs, anatomically-like Deinocheirus were toothless herbivores. These features are completely opposite to most carnivorous theropod traits. Why did they develop this way towards the end of theropod evolution? Did evolution of various groups go haywire and experimentally crazy towards the end of their tenure? Like various Chinese emperors famous for growing long fingernails protected by elaborate guards, as symbols of their high status, the bony curved claws of therizinosaurs, also in life protected by horny sheaths, have become the highly recognizable symbols that immediately identify them. But did they have any function? Or were they just examples of dino-growth-gone wild? Maybe other dinosaurs said, “it takes all sorts to make a Mesozoic world!”

Therizinosaurs were breaking news in 2005 when Utah Geological Survey (UGS) paleontologists reported an ancestral species Falcarious utahensis from near Moab in the prestigious international journal Nature. The UGS described it as “evolution caught in the act” on a path between carnivorous sickle-clawed relatives like Velociraptor and Utahraptor and “more advanced” plant eaters.

The full book and some additional web-only pages are available for download at www.nps.gov/subjects/fossils/coloring-book.htm