If you’re visiting or live in the Southwest, you’ve likely encountered brightly painted, carved figurines in gift shops. You may have even purchased one. To the average non-Native, “kachina dolls” are a beautiful representation of Southwest Native American culture. The human figures, reminiscent of local ancestral rock imagery, are often appropriated for the production of Southwestern home and metal décor. Non-Natives might enjoy these objects for decoration and other reasons, but to the Hopi (and Zuni) tribes, Katsina is a religion and a way of life. The symbolism inherent in these objects, which are commonly sold as souvenirs, is complex and dates as early as the mid-18th century. Yet, the religion is much older, dating back to AD 1270. 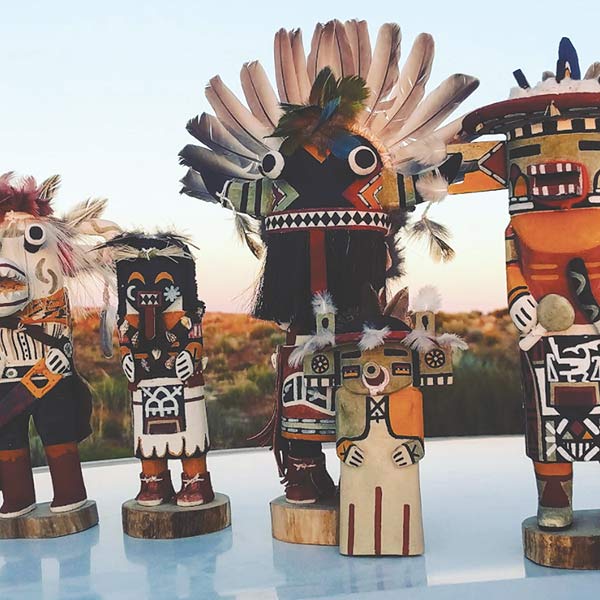 Katsintithu (or tithu) made by Hongvi (Anthony Marquez), from the village of Hotevilla, Arizona. Photos courtesy of Thom Moreau, Moab, UT.


The Hopi spelling of the word is Katsina, and it refers to three distinct aspects of Hopi culture:
Katsina spirits: intentionally capitalized, this aspect refers to spiritual beings who support or chastise humankind. Mostly well meaning, they are said to visit the Hopi mesas from January-July to bless the people with fertility, rain, good health, longevity, and other gifts. The Hopi people believe that when they are not visiting they are at the sacred site of Nuvatukaya’ovi, otherwise known as the San Francisco Peaks in northern Arizona.

Katsintithu (or tithu) made by Hongvi (Anthony Marquez), from the village of Hotevilla, Arizona. Photos courtesy of Thom Moreau, Moab, UT.


Katsinam (plural) dancers: also intentionally capitalized, this aspect refers to Hopi members who take part in sacred ceremonies of the Katsina religion. During specific times of the year Katsina participants for the Hopi literally become sacred entities that embody the Katsina spirits. They appear in underground kivas to an audience of male tribal members, as well as to the village community.

Katsintihu (singular) / katsintithu (plural): intentionally lowercase, this aspect refers to the katsina non-Natives are most familiar with, predominately the carved wood figures sold in gift shops. Hopi believe these objects embody the Katsina dancers/participants. Katsina are not “dolls”, rather, they are cultural teaching tools commonly displayed in homes as a reminder of the spirits they represent.

Whereas katsintithu represent a belief system that is sacred to the Hopi culture, the billion-dollar art market continues their reproduction for a profit. Federal law requires that objects sold as Native American art is made by Native Americans, but the legislation does not designate which tribes may reproduce specific types of Native American art. This means that other tribes can legally reproduce designs and/or sacred objects like katsintithu, the intellectual and cultural property of the Hopi. To this point, many “kachina dolls” available for purchase may not be authentic. If you are captivated by Katsina, it is worth considering the maker of and the cultural symbolism behind the carved figures.

This October, learn more about katsintithu at a new Moab Museum exhibit featuring Hopi carvers and their styles of representing the spirit world. We will host several members of the Hopi tribe to conduct carving demonstrations and, in some cases, offer interpretation and answer questions from the public. We invite you to join us! For more information about this exhibit, including information about event dates, please visit moabmuseum.org.

The information in this article is attributed to Barry Walsh’s 2019 publication, “The Great Tradition of Hopi Katsina Carvers 1880 to Present,” and “Sacred Objects and Sacred Places” by Andrew Gulliford (2000).